I'm sitting with my laptop, in D's corner, and standing diagonally in front of me is the garden door. And through its glass, I can see seven shades of the same colour. Brown.

There's a beige, a tan, a terracotta. Auburn, burgundy, chocolate and rust. But it's all just a tinge, a tint, a tweak away from being utterly brown.

When I first moved to England, I remember being overwhelmed at the amount of brown that was always within my range of vision, at any given time of day. Which is a laugh, considering I'd flown in from a sea of brown arms and legs and faces.

This was different - there were men in brown tweeds, and women in brown hats. Cushions in brown covers. Sofas in brown leather. Fences in brown varnish. Roofs with brown tiles. Then, soon after I arrived, autumn followed. And what little there was left of other colours disappeared. The landscape slowly changed till it matched the tweeds and the tiles. 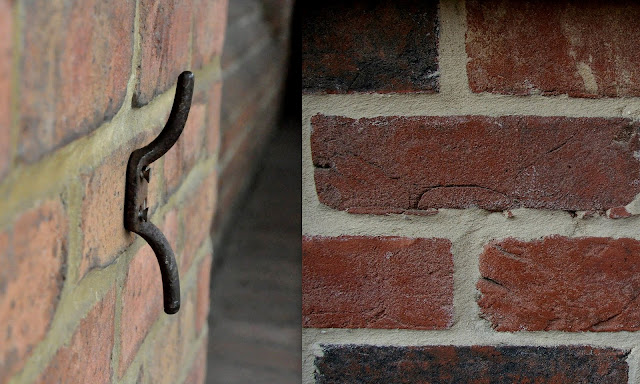 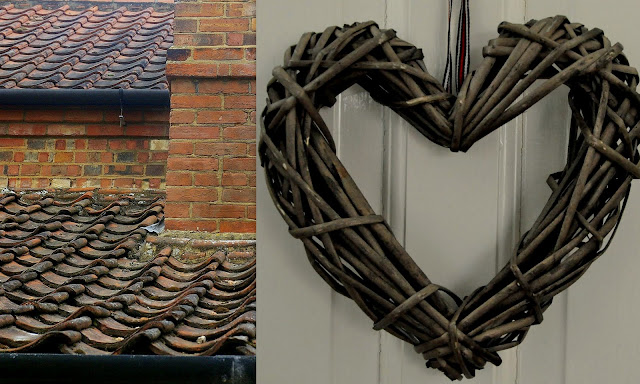 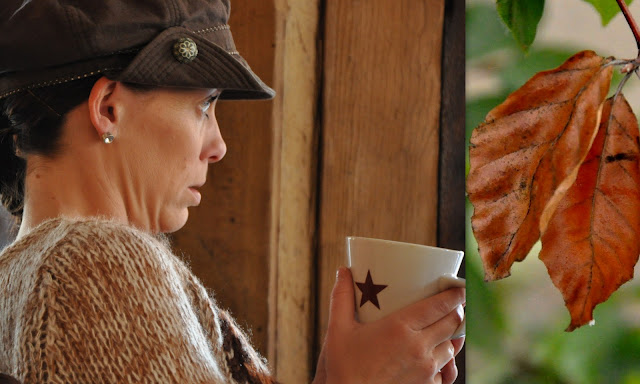 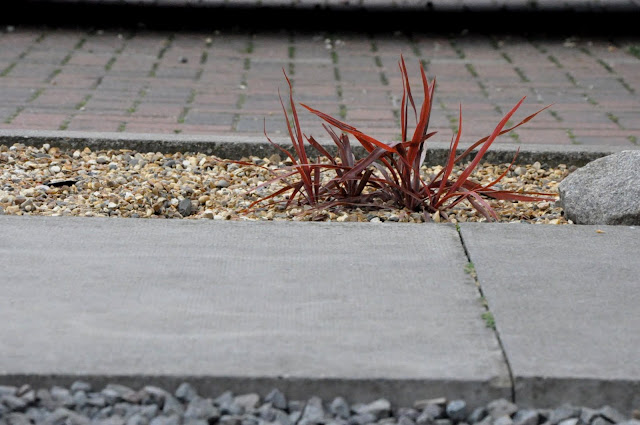 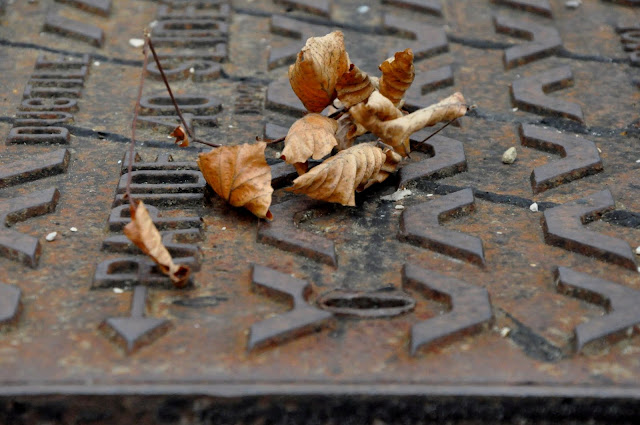 I didn't like the onslaught of brown on my senses, not for a long time. But it has grown on me since. In India, I took the warmth of brown for granted. It was common, like toast, nothing special. But in a place where the cold wind blows, it's different. Here, brown is more than a colour. It is an attempt at warmth. Like wicker baskets on a flagstone floor. Like brown paint around a faux fireplace. It adds warmth where there is none. So this year, when I saw seven shades of brown outside my window, it felt like nature's way of cupping a mug of dark, hot chocolate in its hands.

Here's a healthy little brown something from my kitchen. It's a new love - Lentilles vertes du Puy, or Puy Lentils. Firm, and full of rustic colour and texture, puy lentils stand out from all their other lentil cousins. I tossed them with some olive oil, a sprinkle of cumin powder and a dash of pepper. Added a few pumpkin seeds, a blob of mascarpone. And stuffed them into little parcels of wholemeal flour. And baked them into these glorious little pockets, filled with spiced lentils and melted mascarpone. They were so good, they had to be blogged, and passed on to you. 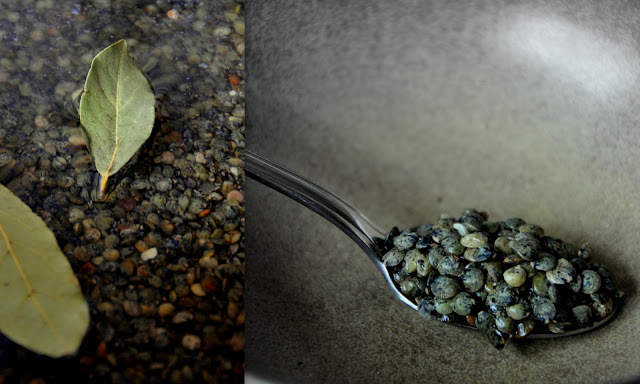 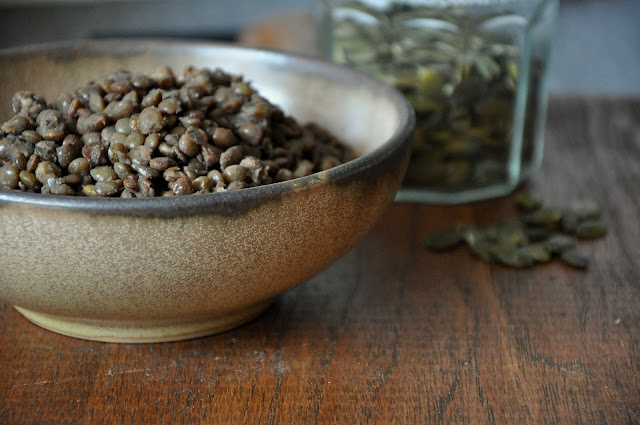 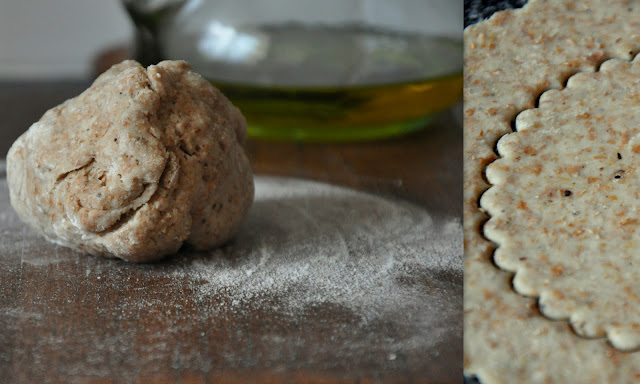 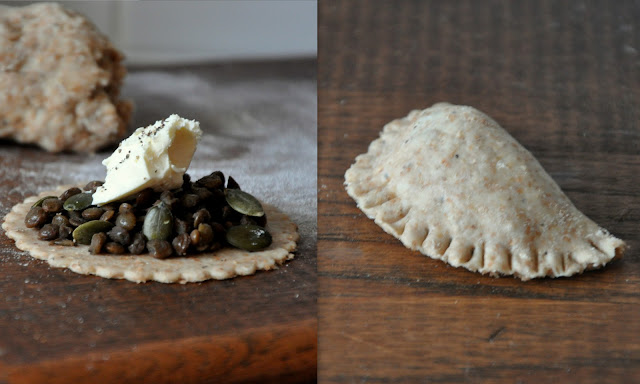 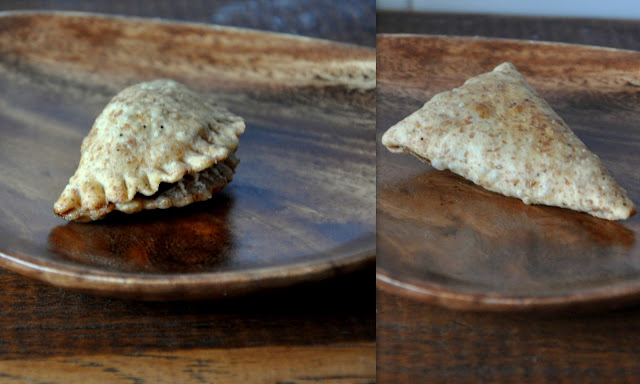 Boil the puy lentils in water with the crushed garlic, bayleaf and salt till it's soft and almost all the water is absorbed. Heat a teaspoon of olive oil, add the boiled lentils and the cumin powder. Toss till any remaining water has dried up. Keep aside.

In a large bowl, add a tablespoon of olive oil to the wholemeal flour, some pepper and salt, and mix well. Slowly add water and knead till you form a firm dough.

Roll out the dough, and with a round cookie cutter, cut out a few circles. In each little round patch, put a heaped teaspoon of lentils, a few pumpkin seeds and a blob of mascarpone. Fold your patch in half, and press along the rim with a fork to seal. (I made a few of these pretty parcels, then I did away with the cookie cutter, and folded the stuffing in simpler, and quicker, triangle pockets. Both tasted as good.)

Brush your parcels with olive oil, line them up on a baking tray, and bake them in the oven at 180 degrees C, for about 35-45 minutes depending on your oven, and till the shells are brown and crisp.