Warm sea rolls in. Each wave inhales and exhales like a yogi, swells up and out of the waters, stretches towards us in a powerful arch, then flattens itself at out feet in pliant froth. Chotto-ma shrieks with a glee that does not ebb, not even at the hundredth wave. 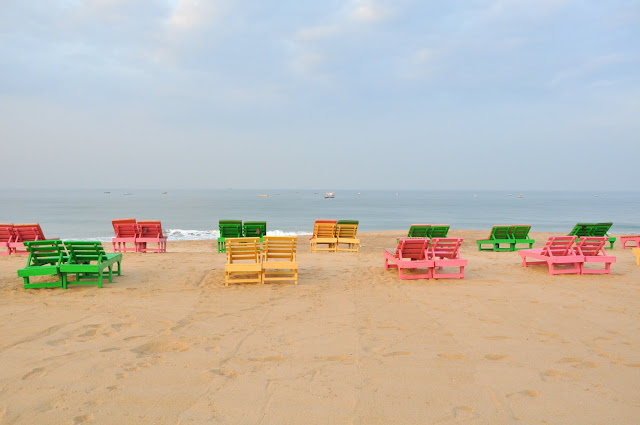 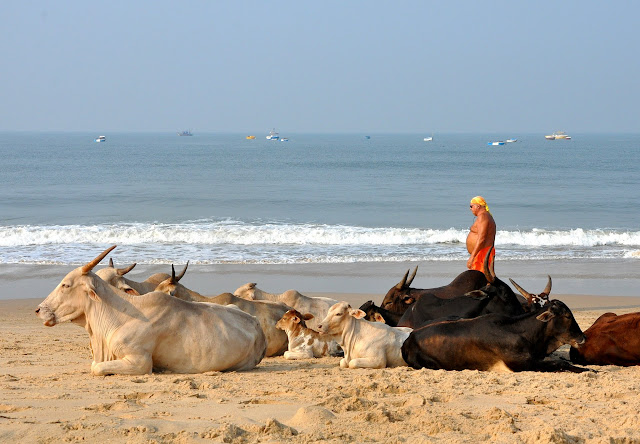 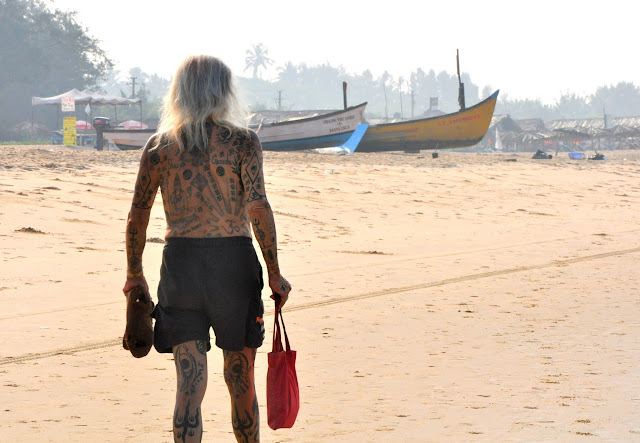 Our mornings in Goa always started like this. We woke up at dark, and walked out at dawn, out of the old Portuguese casa we were renting in Candolim. Bhupen, the casa's gardener and Man Friday, always armed us with a long stick to keep stray dogs at bay. 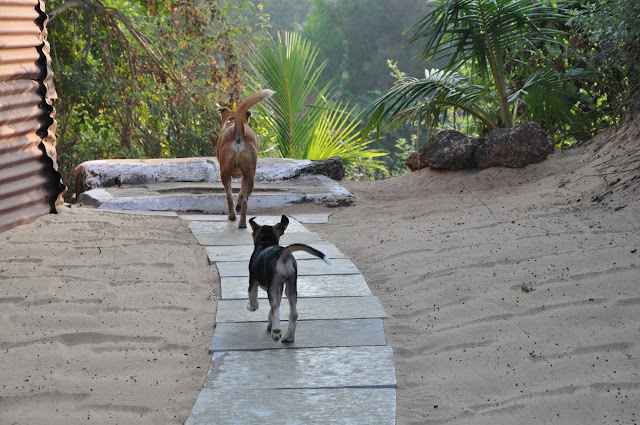 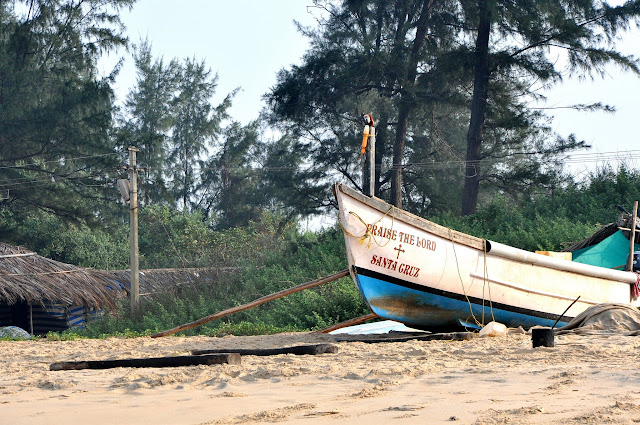 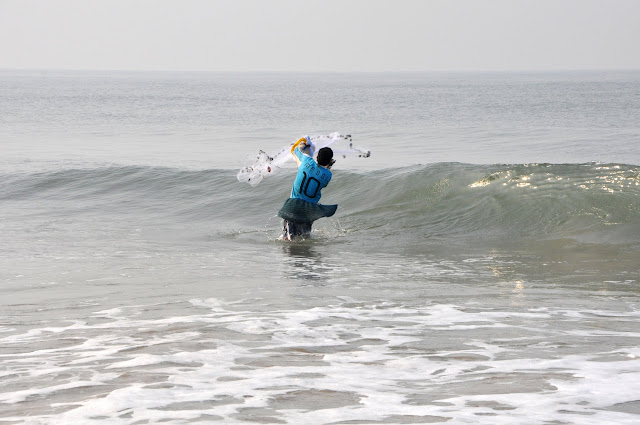 Three days after landing in Kolkata, D, Chotto-ma and I took a flight to Goa with my parents in tow. My brother flew in from New York. And suddenly we were all together after a very long time. In a beautiful, whitewashed villa, spending days lazing in the pool, taking walks on the beach, eating seafood at the shacks with our toes in the sand, and ending our days with beers and cocktails in candlelight watching ships bob and twinkle in the inky Arabian. 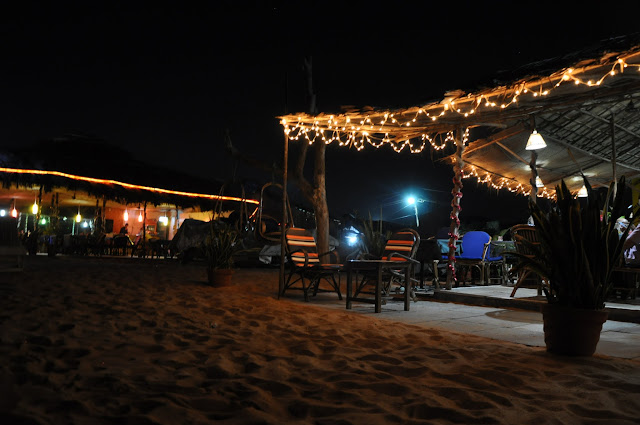 Goa is not a place. It's a way of life. It's the patch of India that most knows how to live and let live. It's a place D and I return to time and again. This time, for the first time, we had family with us. And a little girl who had to be introduced to a place we've loved for long. She was in her element in Goa: salty-haired, playing with the dogs who followed her faithfully, collecting shells, reading Harry Potter all afternoon, drinking tall glasses of watermelon juice, or begging for five minutes, just five more minutes, in the pool.

We traipsed around Panjim, we sat in empty, little-known churches with its cool, carved beauty arching around us into sun-dappled domes. We browsed markets and haggled over skirts cut out of old silk sarees. We watched fishermen stand by their boats in the early morning light, plucking off little silvery fish off their nets. We ate Xacuti, and chatted with the locals boys who worked in the beach shacks. We noticed how hard they worked, and how little tourists did to help them - leaving the sands strewn with empty bottles and cans and remnants of their night's wildness. Each day at dawn, the boys would clean the beach with resigned patience, then smoothen the sand in painstaking strips with what looked like a wooden plough. 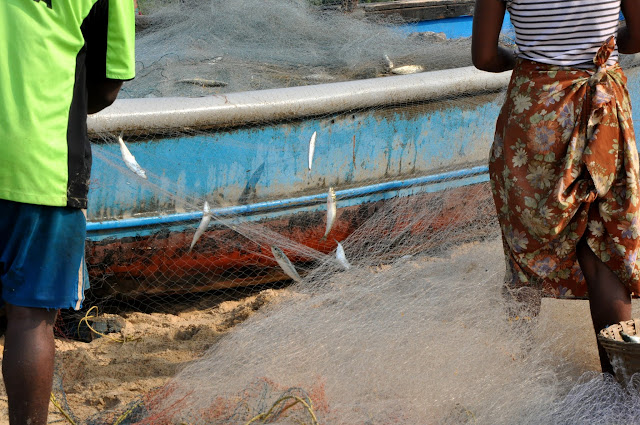 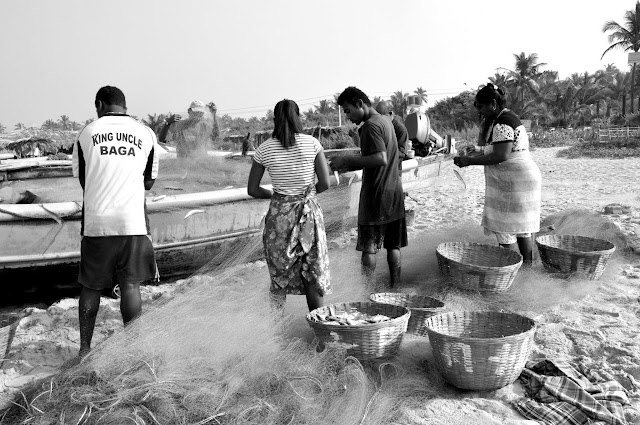 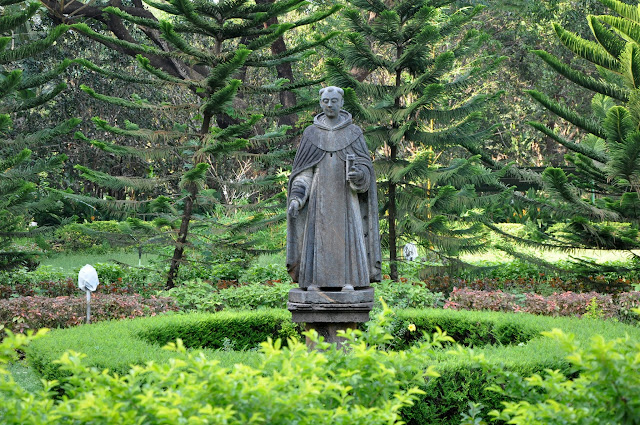 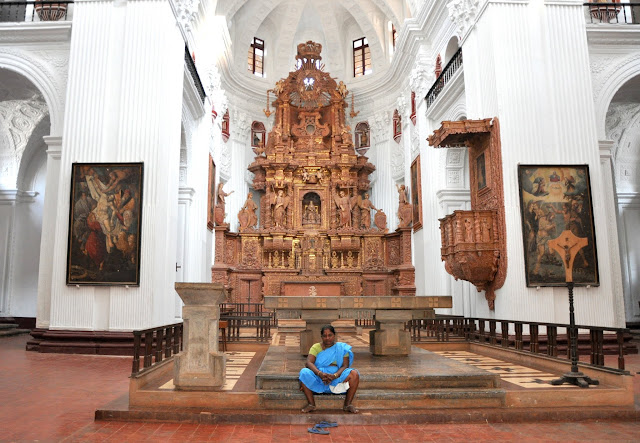 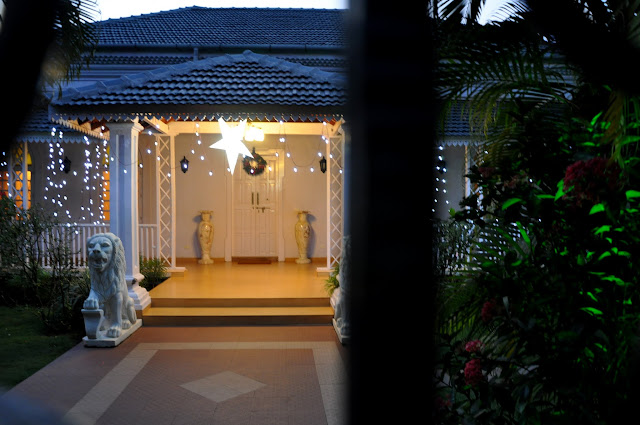 There's much about Goa that has changed in the last decade. On the more popular beaches in North Goa, most shop-signs and restaurant menus are in Russian. Signs of how much we concede for commerce, flexing so far that we run the risk of losing ourselves. But for those who take the time to walk away from the madding crowd, there's still the Goa of cashew trees, rickety bamboo bridges over thin rivers, calm sands, a single shack with good Goan food and moonlight falling like a beam of thick torchlight on black waters.

And there, you can sit in the dark, with nothing but sounds of the briny sea, and a sky screaming with stars.

If you want an old Portuguese villa all to yourself, you can't do better than Casa Maya, where we stayed. Gorgeous interiors, stone floors, white walls, dark wood and Andy Warhol prints. A gardener and cook. And a pool. 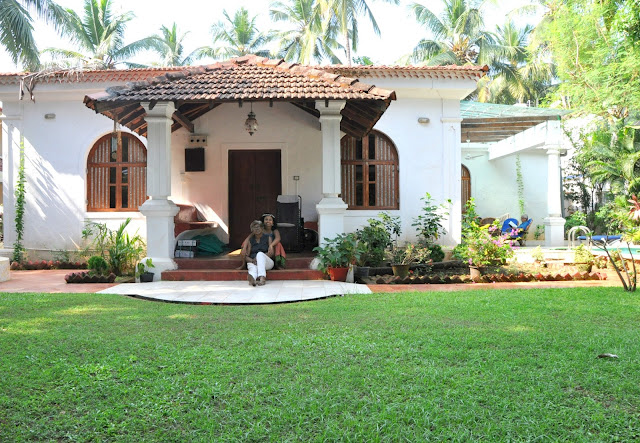 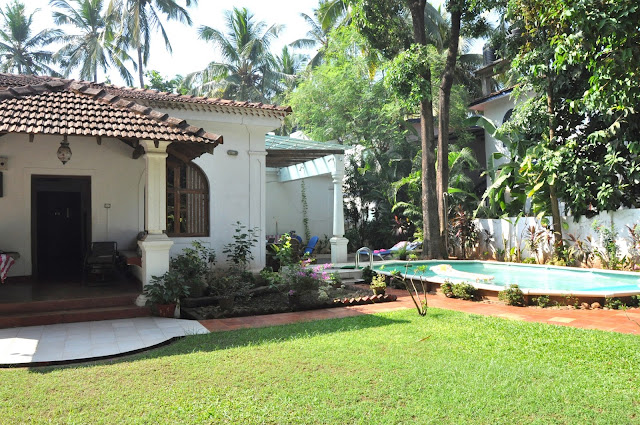 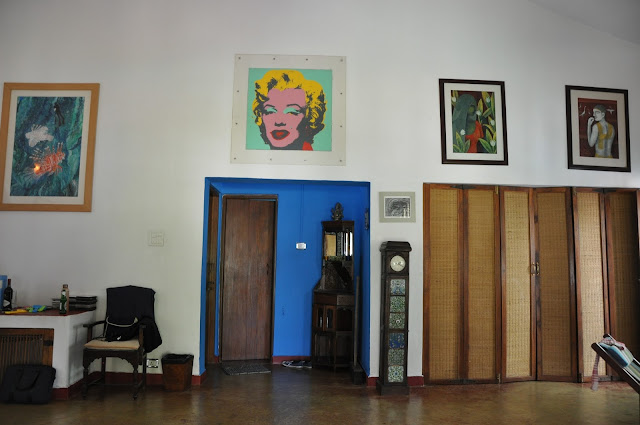 Everyone has their favourites in Goa, ones they go back to, the shack on the beach they have breakfast in. These places are best found by yourself, traipsing aimlessly on foot or in your rented Vespa. But if you're looking for a special restaurant for a really good meal, here are our top three.

Bomras in Candolim
The best Burmese food I've had in a while, and absolutely flawlessly done. Try the 'Tea Leaf Salad' for a starter. Each of us took a different main course, and not one failed. The desserts are seasonal, and pretty sensational - I had the 'Coconut and Passion Fruit Pannacotta'.

La Plage in Ashvem
The most chic beach 'shack' you'll find in Goa, and on an endless stretch of sand that is still unspoilt. It serves fresh French-Mediterranean food with a local touch, and had us going back and back.  (In fact, it was the only restaurant we repeated.)

Mum's Kitchen in Panjim
Authentic, traditional Goan food in a beautiful, quiet area in Panjim. Fiery, coconut-y curries served with plump rice or sweet, fermented breads fresh out of the oven. Their desserts too are to die for. The restaurant's garden has a fish pond with a little bridge to cross, which charmed Chotto-Ma.

And finally! After months, I managed to photograph something out of my kitchen. So, here's a recipe for a very Goan dish (with a tiny twist), made with sausages (the Goan version of chorizo), that we brought back all the way to cold, grey England. 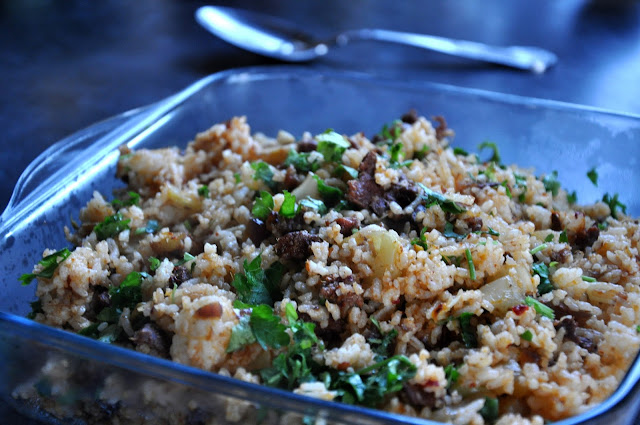 A bulb of fennel, chopped
1 white onion, chopped
A pack of Goan sausages (or chorizo if that's what's available)
1 tsp coarsely pounded black pepper
A generous cupful of chopped flat-leave parsley
Cooked rice (perfect if it's a day old and out of the fridge)
2 tbsp olive oil
Salt

(Note: I haven't given measurements for the sausage and rice because it's better if you tweak that according to taste - the sausage has a strong flavour, so, if the flavour is too strong for you, add more rice. And if it's a flavour you love, add more sausage.) 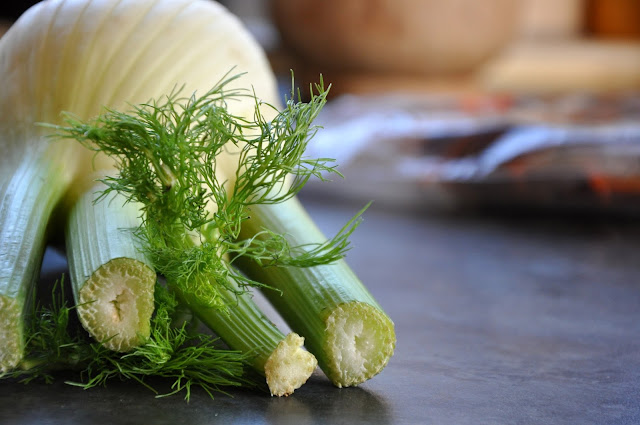 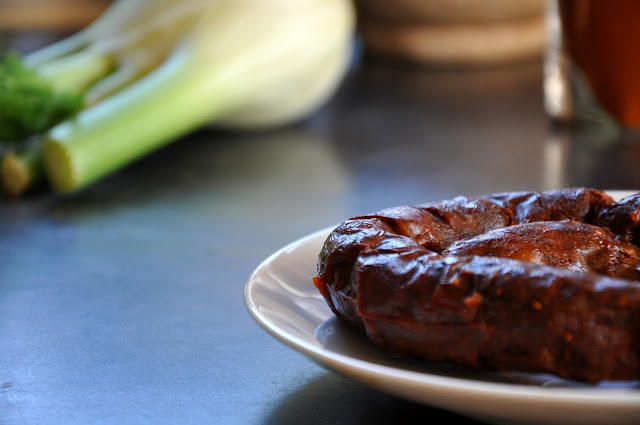 Start with the sausage: snip open the encasing skin and take the meat out. It'll come out in coarsely cut chunks, which is perfect for the pilau. If you're using chorizo, just chop up the sausage in uneven chunks and pound them a little bit using a mortar and pestle. 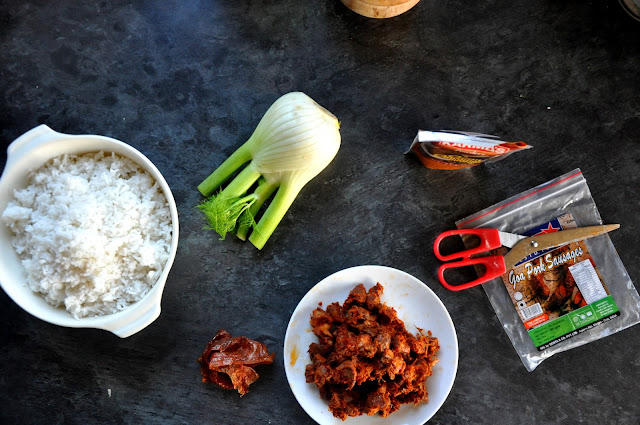 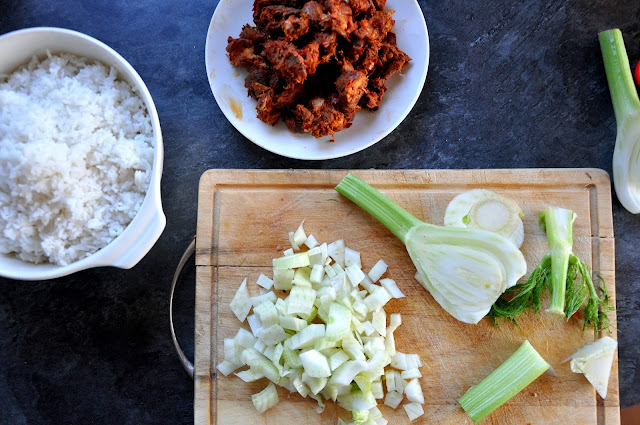 Heat the oil in a pan. Add the onion, fennel and black pepper in together. Stir on medium heat for a few seconds, then add the sausage. Stir for a minute or so - the sausage with let out oil and a lovely smell of garlic and spices. Add the rice, and salt. Mix well till the rice is evenly coloured with the sausages. Take it off the heat.
Add half of the parsley, mix and cover with a lid for a few minutes. Before serving, garnish with the rest of the parsley. 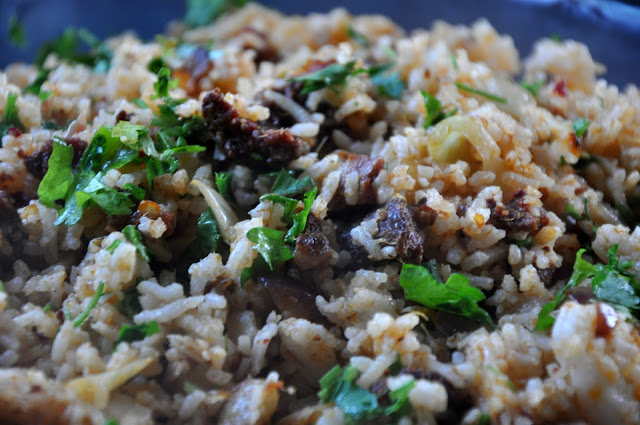 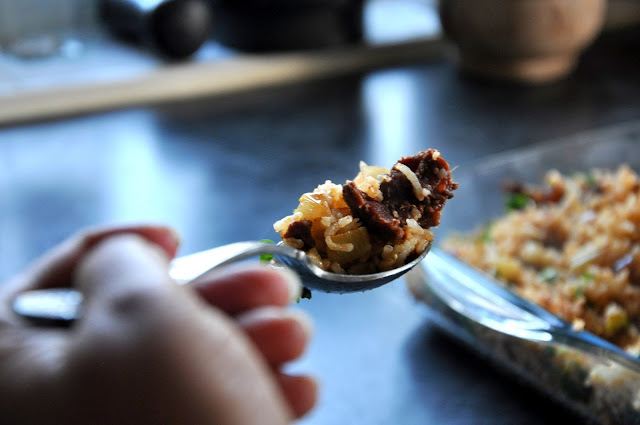 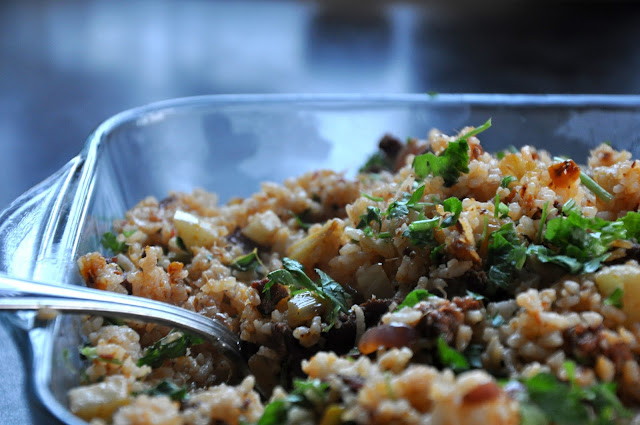