When we were young, and seated around the dining table, there were a few rules that my brother and I had to follow.

Waste not. Finish what you take.
Try everything. Fuss is not an option.
'Gaal-e haath diye bosho na' - Don't sit with your cheek in your palm
Never eat in a hurry, nor standing up.
'Khete khete jol kheyo na' - don't break your meal with sips of water.
No, don't make balls of your rice to practice tossing into your mouth.
Say 'uthhi' before leaving the table.
Don't talk while you eat.

Now, the last rule goes against the very purpose of family meals in the West. Where conversations are things that all dining tables must be sturdy enough to withstand. That's where you agree, and disagree. That's where you tell your parents about your report card. Or a new boyfriend. That's where your parents tell you that a great-aunt has died leaving them enough money for a house in Lanzarote. Silence is swallowed up quickly. Because a family sitting in silence during mealtimes must surely be on the verge of falling apart. Divorce. Disease. Debt. Delinquency.

But in India, people like my dad grew up on 'Silence is golden'. More so during mealtimes. You can either talk, or you can taste. You use silence to decide if the fish is fresh enough, the mutton soft enough. You use silence to smell the spices. You use silence to feel the rice stick to your fingers. You make murmurs of appreciation, the occasional 'bah!', to praise the cook. But all other matters must wait. Only when the plates are clean, and hands washed, do you sit and talk late into the afternoon. And only then do you tell your parents about your report card. When there's no food for them to choke on.


Or, the lamb that you eat in silence. In fact, lamb so good, that I've never talked about it. It's all very hush-hush. I've cooked it for many years, though. And my closest friends know it well.

It's the simplest dish you'll ever cook. And one that ignores all the basic rules of cooking an Indian meat dish. It has no onions, no garlic, no ginger. And no cooking oil - it cooks in the meat's natural fat. Wide-eyed, already? Wait till you eat it.


The list of ingredients is very sparse, but very powerful:

500 gms boneless lamb (on-the-bone is even better, but boneless is what I had at home)
A very, very big bunch of coriander, chopped very coarsely
1 lime
A bowl of green chillies, stalk on.
Salt
Butter 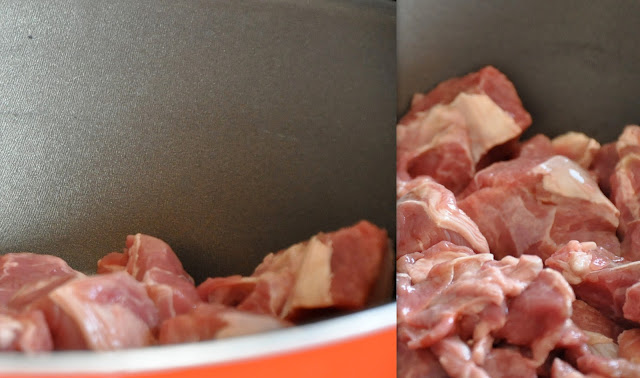 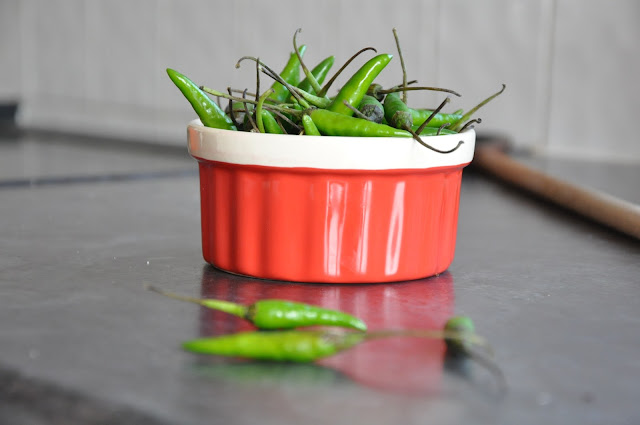 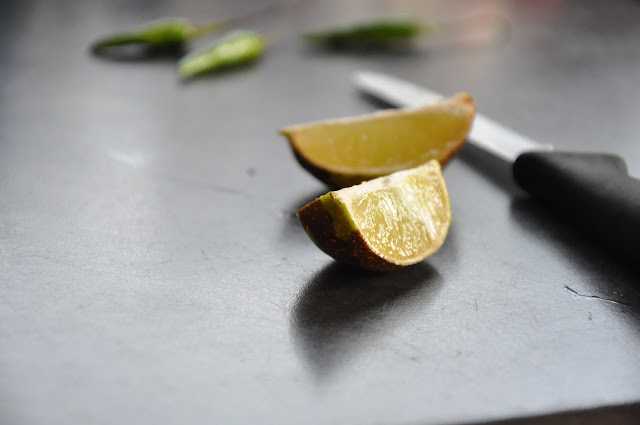 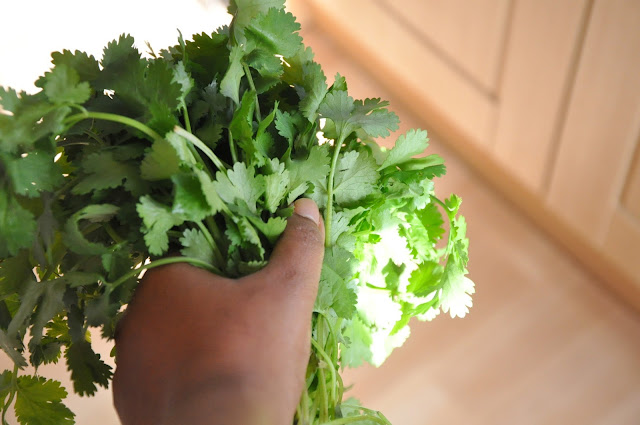 Cut the lime in 4 pieces. Squeeze one of the pieces into the meat.
In a deep pan with a heavy lid, spread out the meat and sprinkle generously with salt.
Cover the meat with a thick layer of coriander.
Sprinkle the meat with a layer of green chillies. I used about 16, but make it 8 if you're quaking in your shoes, and 20 if you're smirking. Keep the stalks on to prevent the chillies from breaking. That keeps the heat in control, but infuses the gravy with the smell of green chillies.
Put the lid on the pan, and put it on the hob on high heat for a few minutes. Lower the heat as soon as the pan is hot. Leave the meat to cook in it own juices, on very low heat, for 45 minutes.
Open lid, pour in a cup of water, don't stir.
Cover again, and let it cook till the meat is very soft. Add some more water if you need - the gravy should be runny. Add more salt if you need.
Then, pick out most of the chillies and stalks, and just let a few chillies stay in.
Add a blob of butter.
You should now have a gorgeous, green runny gravy, that's very potent and smells like heaven.
Serve with 'norom bhaath' - soft, overcooked rice. Overcooked rice helps to keep the gravy in, and balances the heat. Add a squeeze of lime if you like. 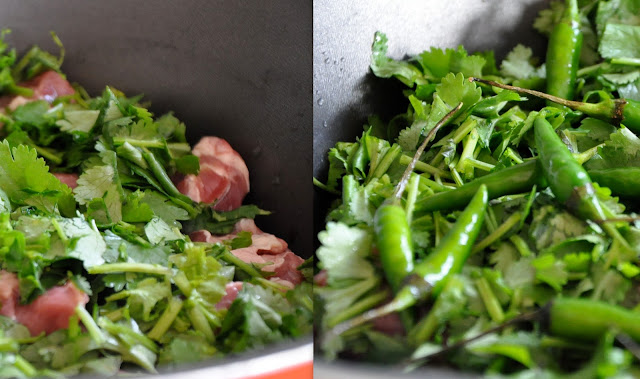 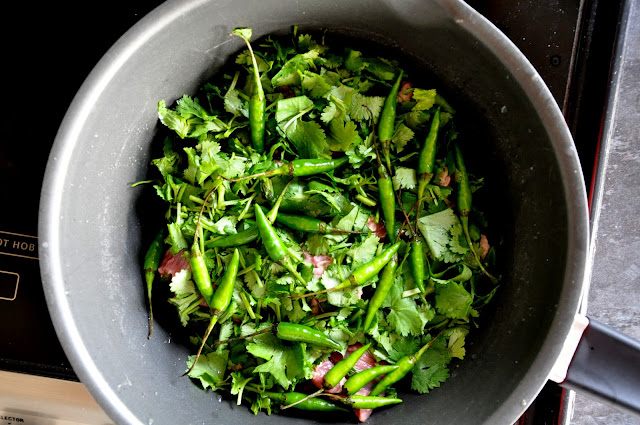 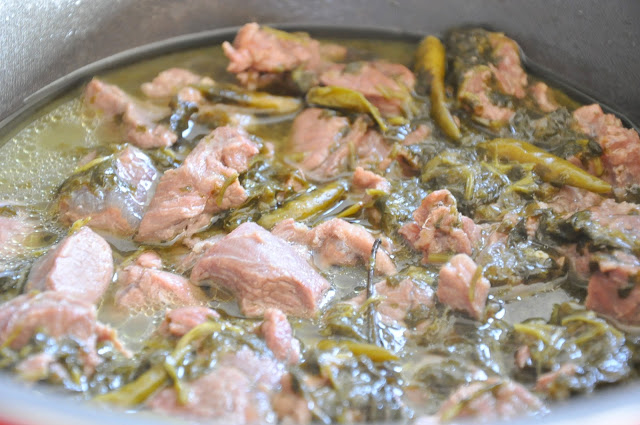 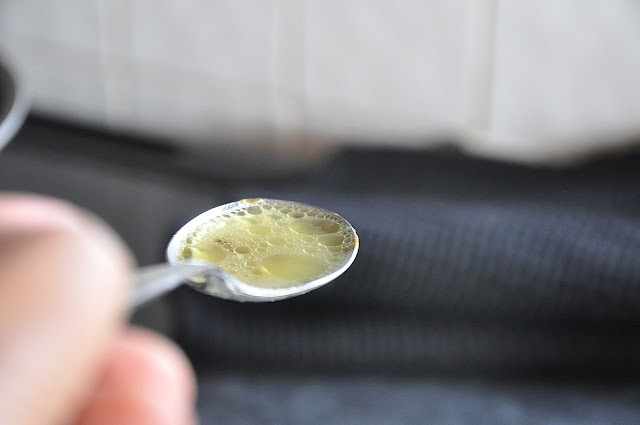 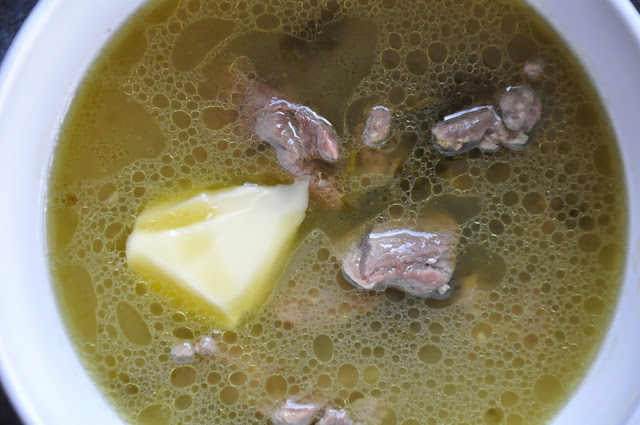 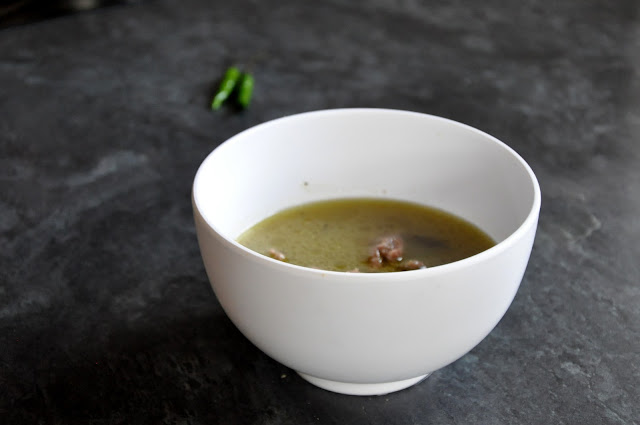